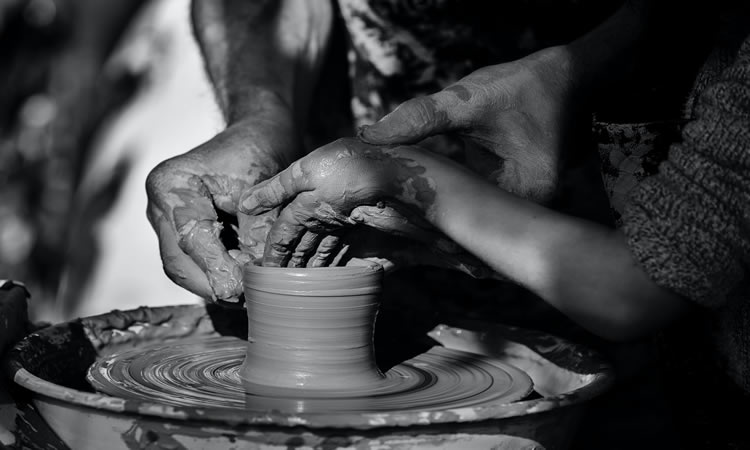 The Texture Of Loss | Josiah Ikpe

Your mother says his spirit still lingers and wanders around the house. She says when he is around she can feel his presence in every corner of the house. At first, you feel frightened and a little confused. How can someone who is dead still be alive? You ask yourself over and over again. You look at your mother – her petite figure, her red and bulgy eyes, the black and white wrapper firmly tied around her waist, and the black scarf knotted at the back of her head like a tail, all points to one thing: the aberration of mourning. But then, in the course of her explanations and elucidations, you realize that she might be right.

She says he always comes at night when everyone is asleep. He would walk to the kitchen, open the pots, and check if there is any food in it. After that, he would walk to the room he shared with her and sit at the edge of the bed, crying and weeping endlessly. She says his voice is always loud anytime he does that. She then says at dawn he would walk into all the room and then walk out of the house. As she says all these, you see how her shoulder falls and rises slightly, how her hand’s trembles, and how she bites her lower lip repeatedly.

Ever since he died, your mother hasn’t stopped mourning. Occasionally, she still sleeps on the mat and continues to receive visitors while sitting on the blue mat. She still wears the black and white wrapper every day. And at the cockcrow of each morning, she still recites the long and doleful requiems of the dead. Sometimes you participate in the dirge and other times you sit in your room and weep silently.

You remember how it happened. You recall vividly how he crossed over to that other world. As you do, emotion chokes you, and tears sprint down from your face. It all happened a day after you came back home from school for the end of the session holiday. When you came on that day, he was extremely elated to see you. He threw his arms wide opened and you ran into them. In the comfort of his arms, you felt his breathing and the heaving of his chest. Never in your life have you had such close contact with him. Yes, he was your father. You loved him and he loved you, no doubt about that. But they had never been any show or display of such affections. Those affections were always hidden and locked within you. But however, on that day, you felt each and every bit of those emotions elude out of your chest in shapes of love and tenderness and gratitude. You later slept that night with your heart soaked in contentment.

The next day, the day it happened before he finally passed on two days after, you stood as he laid lifeless on the couch, the spoon he had been eating with still entangled between his fingers. You watched as your uncle and your older siblings hurriedly carried him to the car. You watched as your mother trailed behind them. You watched as her wrapper hanged loosely around her waist, almost dropping on the concrete floor. You also watched the confused and startling theatrics she did before she finally got into the car. Long after they had gone, you heard her distorted cries and her frenzied screaming.

They didn’t return home that day and the next day. They came back two days after at midnight. During those days of waiting and hoping, you ventured to pray and pleaded with God not to take him away. You told Him to spare his life. You really didn’t know the depth or the magnitude of such a request, but anyways, you continued asking and didn’t relent. Your mother called home often and told you and your immediate older brother to pray and to fast and to write and send out tons of prayer requests to the church. You both did as she said, hopeful that everything will turn out well eventually. Nonetheless, a life defined its own course and stated that it bends to no man.

That day, past midnight, the door squeaked open and your siblings and your mother walked into the living room. You looked around for him but you didn’t see him. You thought to stand and wait beside the door for him. But before you made any move, your mother slumped into the couch beside you. You smiled wryly and thought it must be the aftermath of exhaustion. She stood up immediately and swung her body to different directions. She continued for several seconds and then slumped back into the couch. Suddenly, she told you to come closer. She told you to place your head on her lap, that she wants to feel your presence beside her and that she desires it to comfort her a little. You did as she said with multiple thoughts running through your mind. She pulled you closer and held you tightly, her head resting on your shoulder. And then with a ruffled voice, she told you that he was gone.

Those words sounded strange and foreign to you. You didn’t understand any of it. You looked up and saw your siblings standing in different angles of the living room, silent, tears dripping down their eyes. They said he was dead. But it still sounded strange and unclear to you that night, even as your mother’s closest friend, from the other side of the city, came immediately on hearing the news.

The next morning, still in the state of confusion and incomprehension, you heard different voices from every corner of the house. The voice that stood clearer than all was your mother’s. It was sharp, low, ruffle, and piercing all at once. As you made your way towards her room, you noticed the gaze of everyone on you. Those gazes were accompanied by low and silent whispers. You couldn’t make out what they were saying, but you were sure that you were the centre of their discussions. You entered your mother’s room and saw her seated on a blue mat in between dozens of women. The heavy tears sprinting down her face, the constant jerking of her shoulders, the intermittent hushing of her cries by the women, all painted an unsmudged description to you: the textures of loss.

A wind of awareness blew passed you. You felt a deep abyss growing and gaining grounds within you. All of a sudden, you sensed the ground beneath your feet shaking. You then realized that all those distorted movements your mother had made last night was the dance of sorrow and bereavement.

On noticing your presence in the room, your mother beckoned you to come closer. You tried moving, but you couldn’t feel your legs. They felt heavy and strange. You tried moving again but you still couldn’t feel them. You only watched as your mother jerked herself back and forth, and as her voice pierced the firmament of the heavens. Each sound that she made, you saw yourself moving farther away from her and away from the room. You then saw yourself back in your room, your legs folded beneath your body, and your head leaning against the wardrobe door. Thereupon, a sense of loss clothed you. It clothed you fully and left no space for cogitation. With the speed at which water falls furiously over the edge of a cliff, so did the tears fell endlessly down your face. You didn’t stop or tried to prevent them from falling. You only observed as they got entangled with the catarrh fluids dripping down your nose.

All through that day and the next day and the subsequent days that followed, the tears didn’t stop. Each passing hour only revealed to you the different layers of emptiness. And each passing day defined the true textures of loss. They stated that living without him was living without any sense of understanding. Thereupon, you opened your arms wide and embraced that solitude and quietness that came with loss.

Your mother continues and says the two days she spent while taking care of your father in the hospital was extreme hell and torture for her. She was more like a woman without any senses, running up and down the hallways and premises of the hospital. She recalls how, in the course of his being admitted to the hospital, he was first rejected by a privately owned hospital due to the nature of his condition and how he was also refused admittance by a government-owned hospital on the reason that there was no vacant bed space and how he was immediately rushed to another government-owned hospital, miles away, before he was finally admitted, only after several rounds of pleading with the health practitioners.

Your mother’s face goes blank and sadness clouds her features. She nibbles on her bottom lips as she tries to wheel her emotions. Her voice trails off as she says your father didn’t utter a word all through the days he spent in the hospital. He only shed tears upon tears, even as he breathed his last breath. She talks of how her scarf came off from her head while crossing the highway unmindfully, all in the course of purchasing some drugs the doctor had requested. She talks of how the tears didn’t stop flowing down her face. She also talks of how she sat on the hospital bed, his head on her lap, the tears running down his cheeks, and how his body became heavy thereafter.

A line appears between your brow. Your eyelid droops. You look at your mother and a sense of reassurance and understanding overwhelms you. Perhaps the reason why his spirit still lingers around and the reason why he cannot rest is not only because he left unfinished conversations hanging in the air, but also because the tears that didn’t stop running down his cheeks signifies unspoken words longing to be uttered.

You move closer to your mother. You place your head on her chest and feel the beating of her heart. You believe her, her every word.

Photo by Quino Al on Unsplash Josiah Ikpe is a writer, and a fiction and book lover, born and raised in Lagos, Nigeria. Right from childhood, he had always imagined himself as a character in books. He sees reading and writing as a way of capturing humanity and placing them in one’s world. He’s presently a Law student at the University of Ibadan.
Twitter handle @josiahikpe