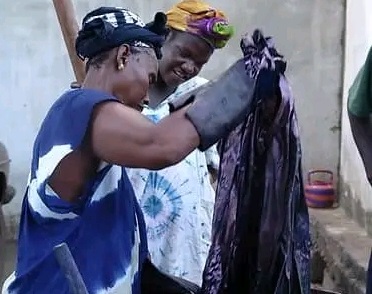 Published by Nnọkọ Stories on November 15, 2022

Ever wondered why our mothers tied wrappers around their abdomens instead of wearing them?
Maybe because, one can never conveniently adorn one’s self with grief;
It has to be strung around her lower neck in a slipknot of tears, tears tucked to the wrapper’s ears alongside old copies of Awolowo’s face saved for supper.
Knowing that its bosom dwelling counterpart can’t buy milk the next dawn for her suckler.
It has to be tied around the fruit of her womb, the joy of motherhood and the curse of Eve straddled heavily ladened as a reminder of the toil of childbirth.
Little wonder it is called labour.
Or it has to be forcefully placed on her like a sanction;
Like a Cape, placed on her as she plays James Brown at a concert and the muddy red graveside was her stage.
She and the back-up mourners are Nadal on Clay court, back and forth they cry the Cape on and off her back, as she wails.
She ties the wrapper around her cocoon, as a constant reminder of the nine months it took her caterpillar to butterfly, only to be swallowed by another belly.
The belly of this savage red earth.
Her pride is swallowed in a landslide.
One cannot simply tailor such grief, for how does one measure the pain suckling on her chest, bursting at the seams as she beats them like the old drums of war, challenging mother earth to a duel?
There’s no way the earth can breastfeed her baby better than she could.
Yet the earth gets to play surrogate mother in King Solomon’s verdict.
She waddles her empty wrapper back home, her London wax bleached in tears.
Tied around her empty cocoon, the bleach makes patterns around cobwebs.
She once tied a tiny heaving chest to her back, today she carried that same chest, breathless, heavy, to the ground.
Now she knows why it is called Tie and Die.
A dire game of wax and tears, tailoring patterns of eyebags and fears on hearts made of Adire.
Ever wondered why our mothers tied wrappers around their abdomens instead of wearing them?
Maybe because, one can never conveniently abhor the hunger in the womb to curse God.

About The Author: Lucas Effa Henshaw, professionally known as Luvas Henshaw is a poet, spoken word artist, author, musician and blogger based in Uyo, Akwa Ibom State of Nigeria. He is the current second runner-up of the Ibom Arts Night Poetry category and a University of Uyo War of words 2020 Finalist.